Brain images of a person who has never used meth (left) and of a meth user after 1 month of abstinence (center). Lighter colors show distribution of dopamine transporters (DAT) in the striatum. DAT distribution is reduced in striatum of meth user. Brain image of a meth user after 14 months' abstinence (right) shows substantial recovery of DAT in striatum. Low levels of DAT in meth users were associated with poorer performance on tests of memory and motor skills, which did not improve with DAT after lengthy abstinence.

At left is a scan of a healthy brain. Note the smooth exterior. At right is a scan of a brain of someone who had used "ice" for 15 years. Where the holes are seen, the brain does not function. 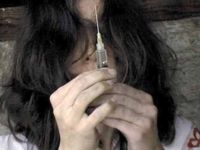